Special thanks to Dr. David Schidlow for our fourth installment of...﻿

What is the background of this study?

o Medical problems and early death remain a problem for children with hypoplastic left heart syndrome (HLHS) during the outpatient “interstage” period between the first (Norwood) and second (Glenn) operations.

o The National Pediatric Cardiology Quality Improvement Collaborative (NPC-QIC) identifies differences in the care of interstage patients in the hopes of learning the best way to care for these children during this sensitive time.

The aims of this study were to answer the following questions:

o Where do HLHS patients receive their interstage care?  The surgical site (SS) that performed the Norwood operation, a non-surgical site (NSS), or at a combination?

o How far is the NSS from the SS for those children who are followed at a NSS or at a combination of sites?

o Are there differences in the number of medical problems or deaths associated with the site of interstage care and/or the distance from the surgical center?

How was this study performed?

o The researchers looked back at patients with HLHS entered into the NPC-QIC database over an approximately five-year period (July 2008 to February 2013).  The site of each patient’s interstage care was noted as (1) the SS that performed the Norwood procedure, (2) a NSS as described above, or (3) a combination.  The distance from the SS to NSS was identified for patients in categories 2 and 3.  The number of interstage medical problems, emergency department (ED) visits, readmissions to the hospital, and deaths were identified for each of the three groups.

What were the results of the research? 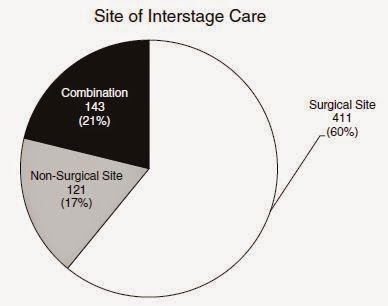 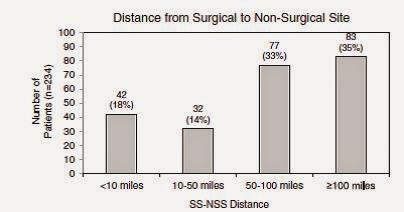 o There were 66 patients, approximately 10% of the entire group, who unfortunately did not survive the interstage.  It was notable that among those 66 patients, 37 (55%) percent of them died in their home or in an emergency department.

What are the limitations to this study:

o There were several limitations to this study.  The main limitations related to the level of detail that was able to be ascertained about these patients.

o The NSS and combination categories were very broad.  As noted above,  they could be anything ranging from a large medical center that simply does not perform Norwood operations to the office of a single practitioner far from a medical center.  This study could not distinguish smaller differences between the two.

o The significance of more breathing and feeding problems identified at the NSS or combination is unclear.  It is not known if these patients truly had more problems, or if the fact that these problems were identified reflected more vigilance on the part of the caregivers.  Another limitation is that these categories are very broad.  Feeding and breathing problems could mean different things to different caregivers.  This lack of detail makes a refined analysis somewhat difficult.

What are the takeaway messages considering the results and limitations of this study?

o More ED visits and readmissions occurred in the SS group, and conversely, more feeding and breathing problems were identified in the NSS and combination groups.  As noted above, these differences did not seem to have an effect on death.

o Finally, the mortality rate still remains high at approximately 10%, with many patients dying at home or in an emergency department.  This is an important reminder that we still have room to improve interstage care and decrease mortality.

If you missed the first three installments of Research Explained, you can link to them here:  https://www.jcchdqi.org/research

Sisters By Heart on Social Media

Donate to Sisters By Heart

Our organization is run by volunteers. Help us by making a tax-deductible donation with our secure PayPal link.

Proudly show your support for Sisters By Heart!  Purchase one of our water bottles only $10.

Proudly show your support for Sisters By Heart!  Purchase one of our tote bags for only $20.

Sisters by Heart is intended to be a support group only. We do not have any medical expertise. We are here to give our personal experiences and offer our support for newly diagnosed parents going through this HLHS journey. Any advice or suggestions we may give do not take the place of medical advice. You are strongly encouraged to speak with a medical professional regarding your child's specific condition.